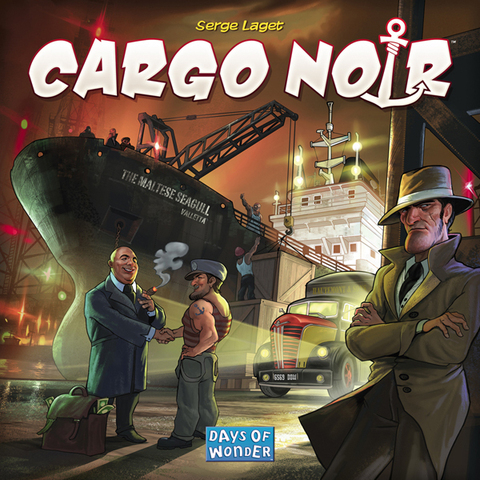 Cargo Noir is a competitve game for up to give players in which you are a mafia family competing with other mafia families around the world to collect smuggled cargo, which you then trade for mafioso things such as dive bars, yachts, political cronies, and militia. Each player starts with the same number of ships and coins, then sends them out to bid on cargo. Players can try to outbid each other  by sending their ships to the same location with more coins. Uniformity and quantity of cargo are both important factors to consider to maximize your buying power when trading  your cargo for Victory Spoils, like yachts and dive bars. The Victory Spoils are worth points, which are tallied up at the end of the game to determine a winner. The game has different layouts for 2, 3, 4 and 5 players.

Cargo Noir’s artwork is very detailed and gives the game a “film noir” feel without being dark. In a game featuring mafia one expects to see places like New York and Hong Kong, but Cargo Noir also depicts locales as exotic as Tanger and Macao. There are five different nationalities of mafia families to choose from–from the Indian mafia family with their saris and snake-charmers, to the Che Guavara-style revolutionary family with their ammunition belts–each equally cartoonish and caricatural, which gives it a fun and international flavor. There is no reading required to play, just a lot of strategy in where you send out your ships and how many coins you are willing to bid for cargo. Strategy and math are used to determine which cargo you aim for, as uniformity  and quantity have their own benefits. The element of luck appears in the variety of cargo on the board. The premise is fun, the artwork is attractive and intricate, and the game is fairly straight-forward to pick up. The coins and ships do not feel cheap–someone who likes games with more interesting pieces than just cards would love it. Perfect for an after-dinner family activity, a get-together of friends, or anyone passionate about film noir!